In a Brown-bag Workshop Series at the Department of Economics, Ateneo de Manila University on 19 February 2020, Clarice Colleen Manuel, a PhD candidate at the Université de Namur in Belgium, presented her ongoing study on “GMO corn Adoption in the Uplands of Bukidnon: Risks and Profitability.”

Clarice shared the initial results of the study that conducted a four-month household socio-economic survey in the summer of 2019, collecting household information from 415 small scale corn farming households in eight barangays in Malaybalay and six barangays in Cabanglasan, two major corn production areas in Bukidnon in northern Mindanao.

Two primary corn varieties planted by the target group within the survey area are the genetically modified or GM corn and sige-sige. GM corn refers to the patented corn that has either pest resistance and glyphosate tolerance (or both). The sige-sige corn refers to the crossbreed variety of GM corn with a traditional corn (e.g. tinigib, a local white corn variety). GM corn seeds are purchased every cropping season while sige-sige corn seeds can be replanted every season because of its inherited traits from traditional corn. Also, GM corn is used as animal feed while sige-sige is cultivated mainly for human consumption. 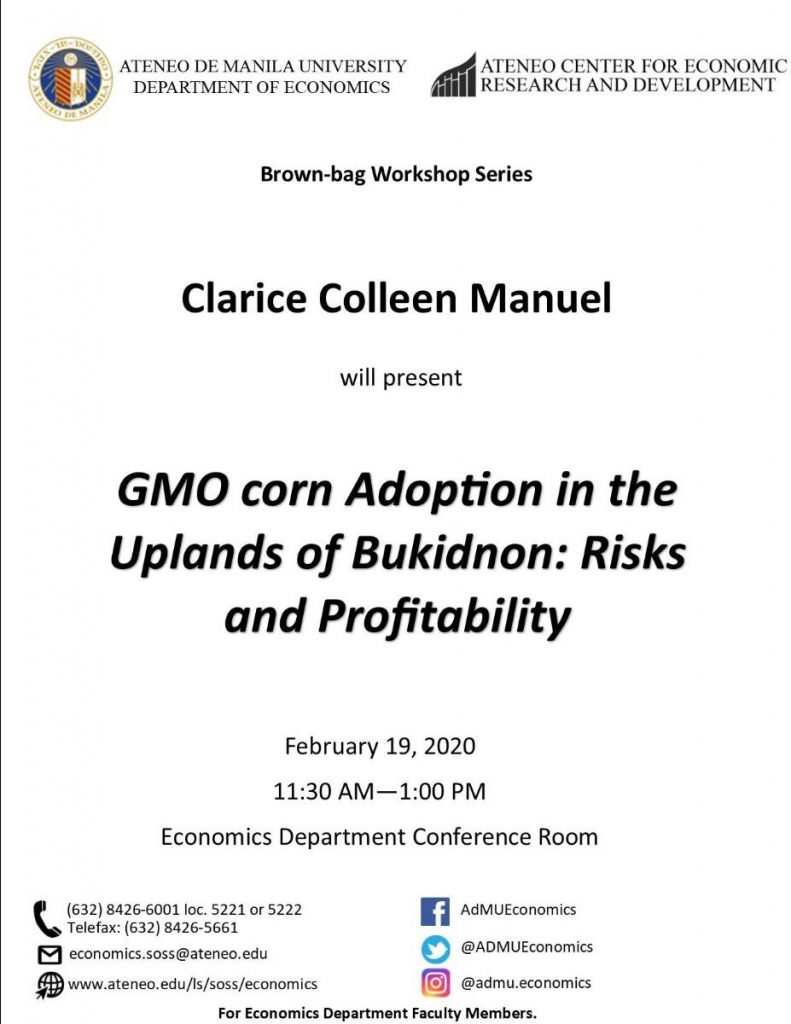 Clarice’s study compared the two corn varieties based on harvests, inputs, quasi-profits, relative risk, and failure probability from the most recent cropping season. And the study findings indicate that GM corn generates more revenue but costs more to produce, and that there is a 30% chance of zero profit should farmers in the area choose to cultivate GM corn, making this variety a high-risk return crop.

Since the widespread adoption of GM corn in the mid-2000s, small scale farmers from Upper Pulangi in Bukidnon, northern Mindanao have experienced expropriation of land, continuous debt, food insecurity, and heightened poverty. The economic exploitation of small corn farmers appears to be widespread in the Philippines, but in order to gain a better understanding of the extent and magnitude of this phenomenon, the project Social justice implications of land use change in the Philippine uplands: Analysis of the Socio-Economic Drivers and Impacts on the Land and its People (LUCID) was undertaken in July 2016 with the support of L’Académie de recherche et d’enseignement supérieur (ARES) of the Belgian government.

Clarice’s study is part of the LUCID project, an inter-disciplinary five-year collaboration that the Environmental Science for Social Change (ESSC), a Jesuit research and training organization in the Philippines,is engaging with its long-time Belgian university partners Université de Namur and Université Catholique de Louvain, with new partners Ateneo de Manila University (Department of Economics and Department of Philosophy) and Central Mindanao University.

The LUCID project is formulated to investigate the socio-economic dynamics and social justice implications of corn cultivation in the Philippines and seeks to understand the dynamics of farmer-level decision making in the context of local opportunities and threats in corn cultivation. The project also seeks to look at the issues under the lens of social justice and philosophy and how the unequal distribution of wealth and opportunities is perpetuated.